Words from the Ship:

Statements and Articles from Outside the Gayogo̱hó:nǫ⁷ Community

"'There is no negotiating with Halftown': Seneca County recognizes traditional Gayogo̱hó:nǫ⁷ sovereignty after Rule 29 passes, resulting in a new letter to BIA": FingerLakes1, August 2021.

In September 2022, after Halftown's second round of demolitions in August, nine members of the Tompkins County Legislature released a letter addressed to President Biden urging all levels of US government to fix the failure to respect Gayogo̱hó:nǫ⁷ sovereignty by rescinding all recognition and empowerment of Clint Halftown. 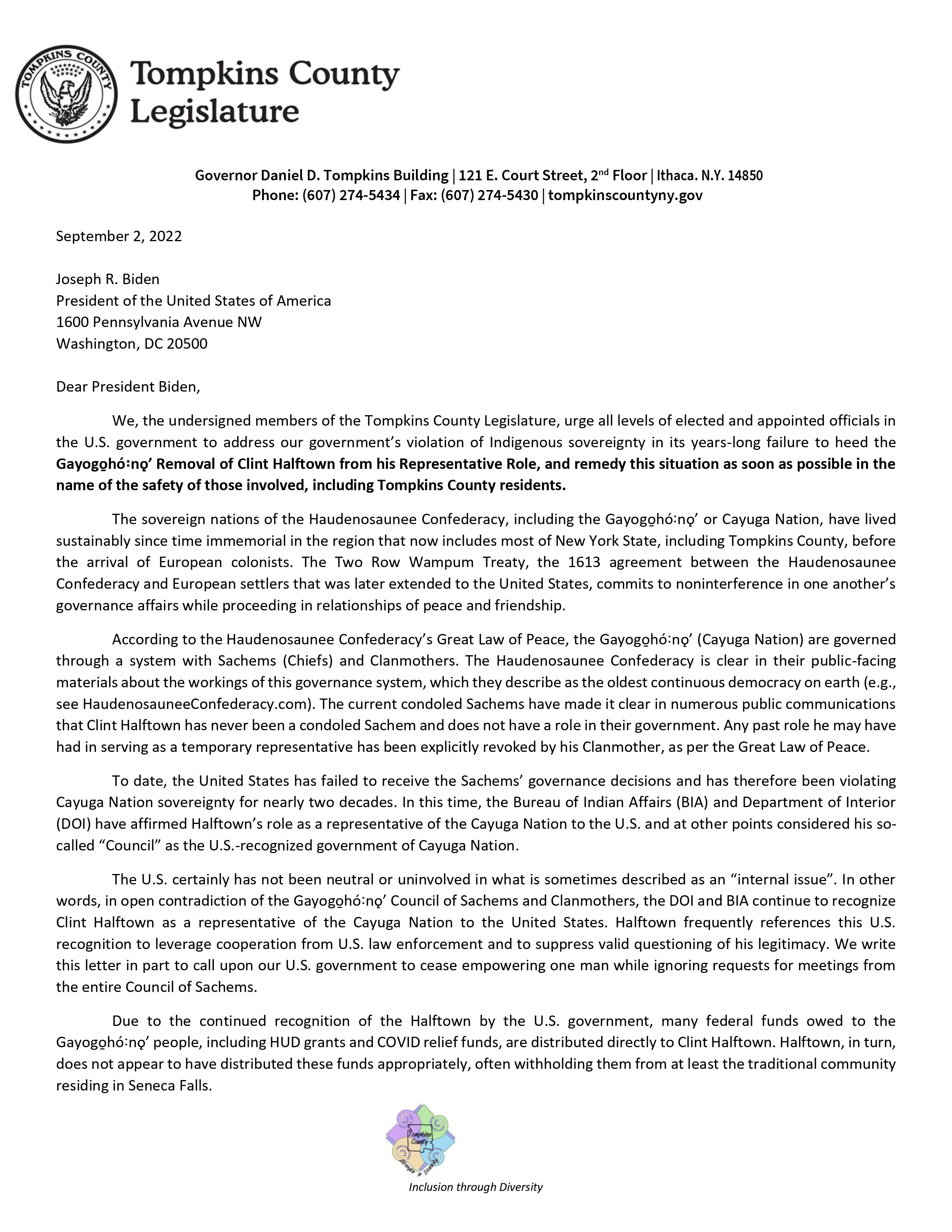 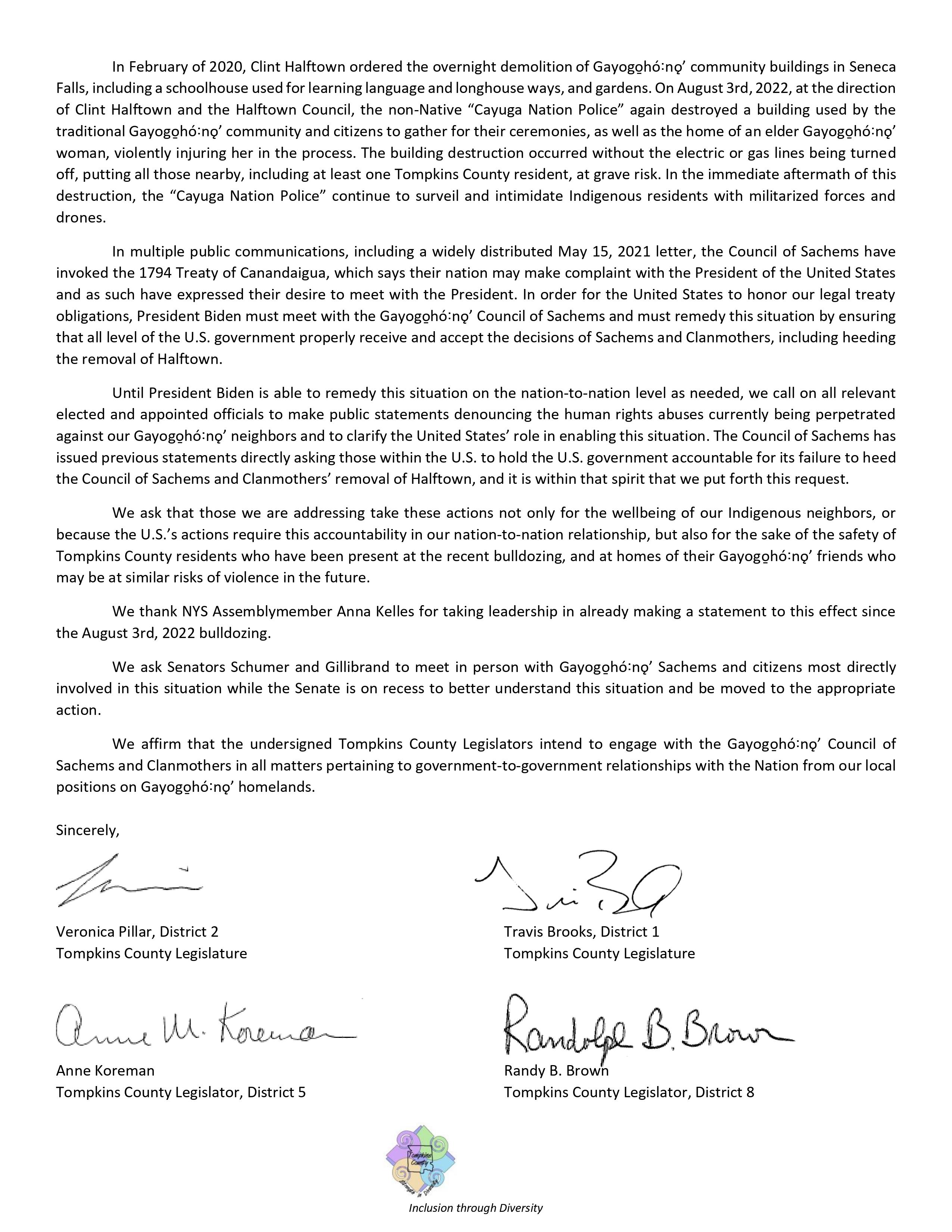 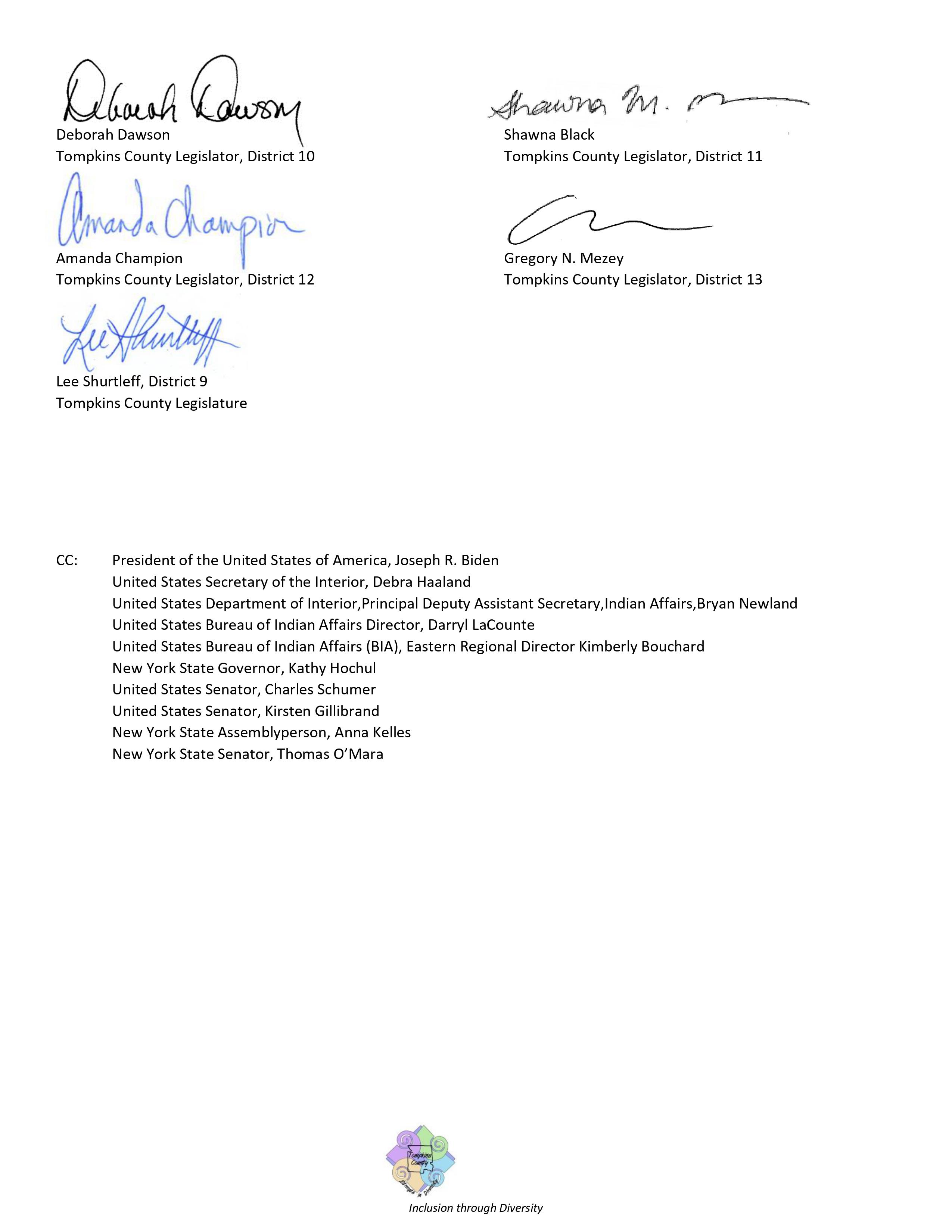 Ithaca joined the Town of Dryden, Town of Enfield, Seneca County, and others when its Common Council unanimously signed a letter in support of the traditional Gayogo̱hó:nǫ⁷ and sent it to the Secretary of the Interior and other U.S. officials. 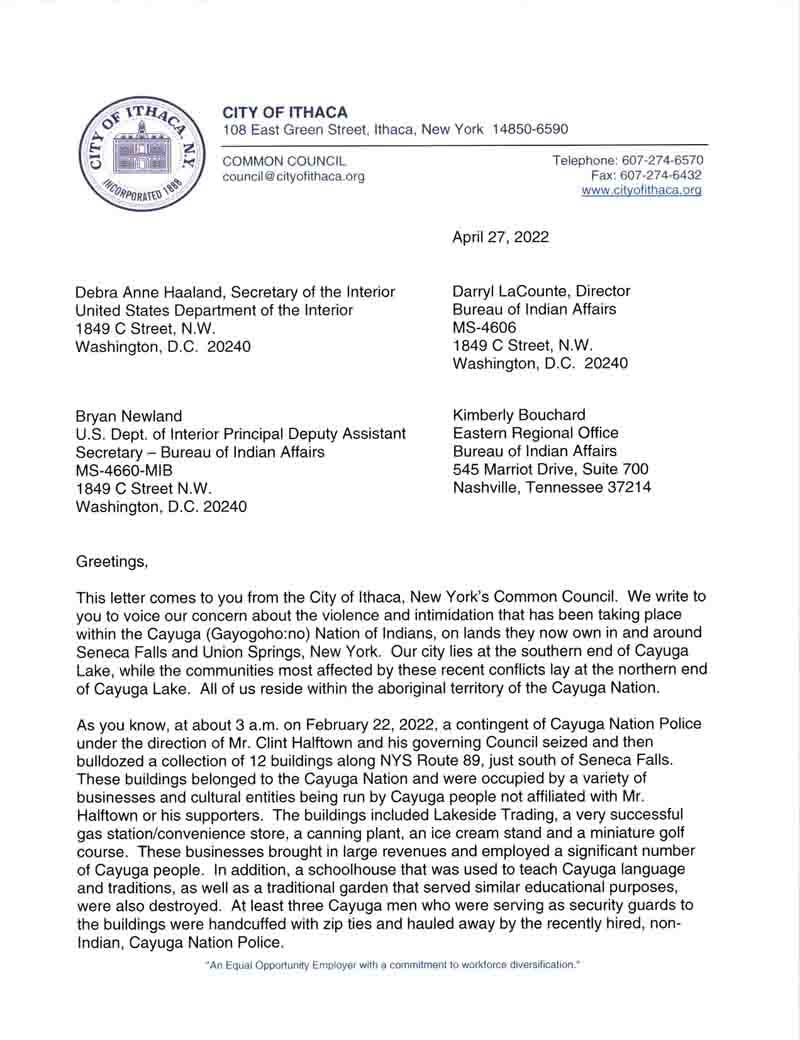 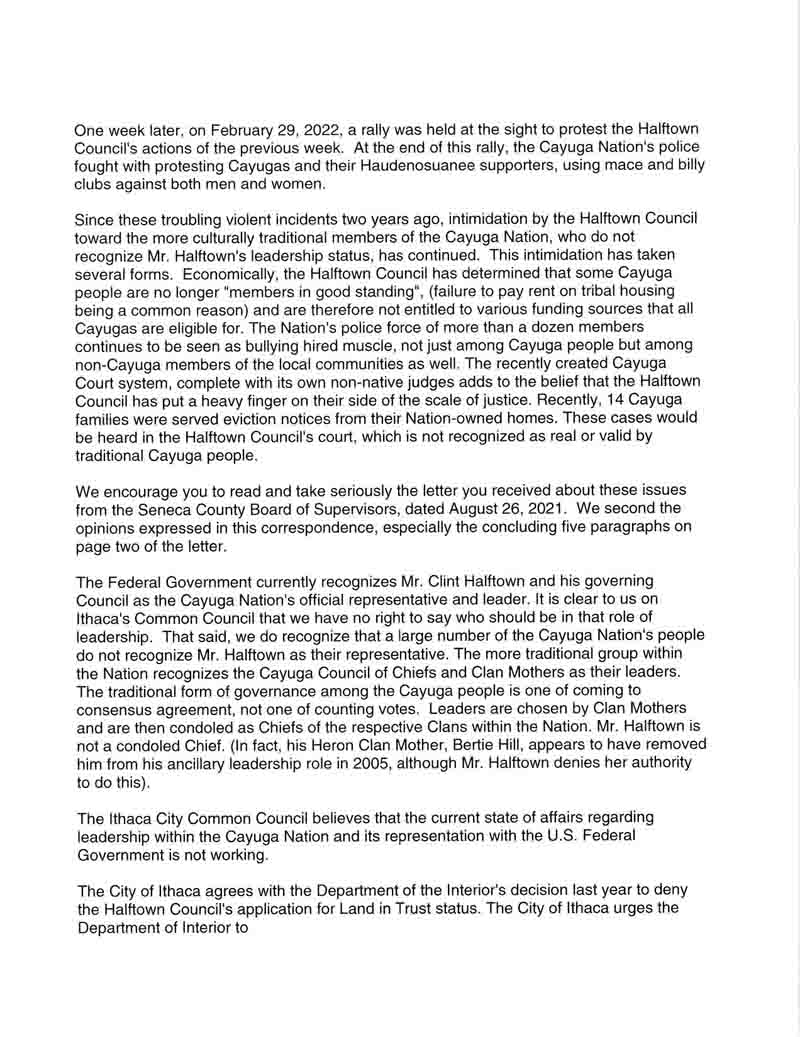 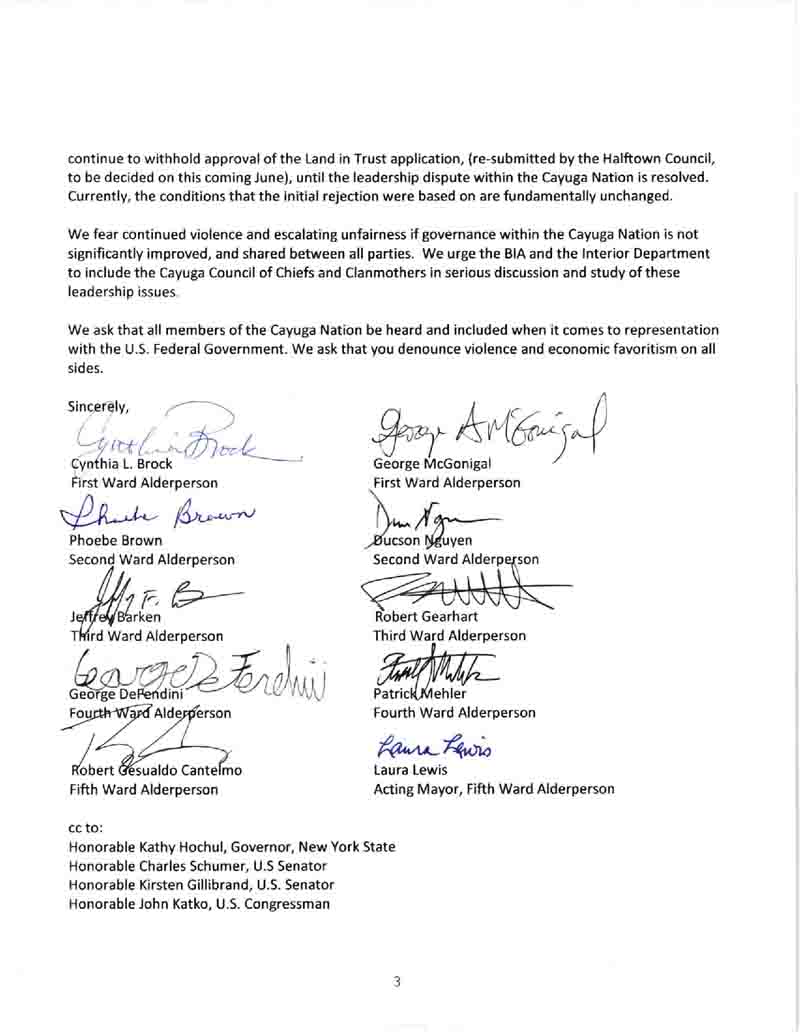 In March, Dryden passed a resolution formally urging the DOI and BIA to cease recognition of Halftown and resolving to engage with the Gayogo̱hó:nǫ⁷ Council of Chiefs and Clanmothers in all government-to-government relations with the Nation. 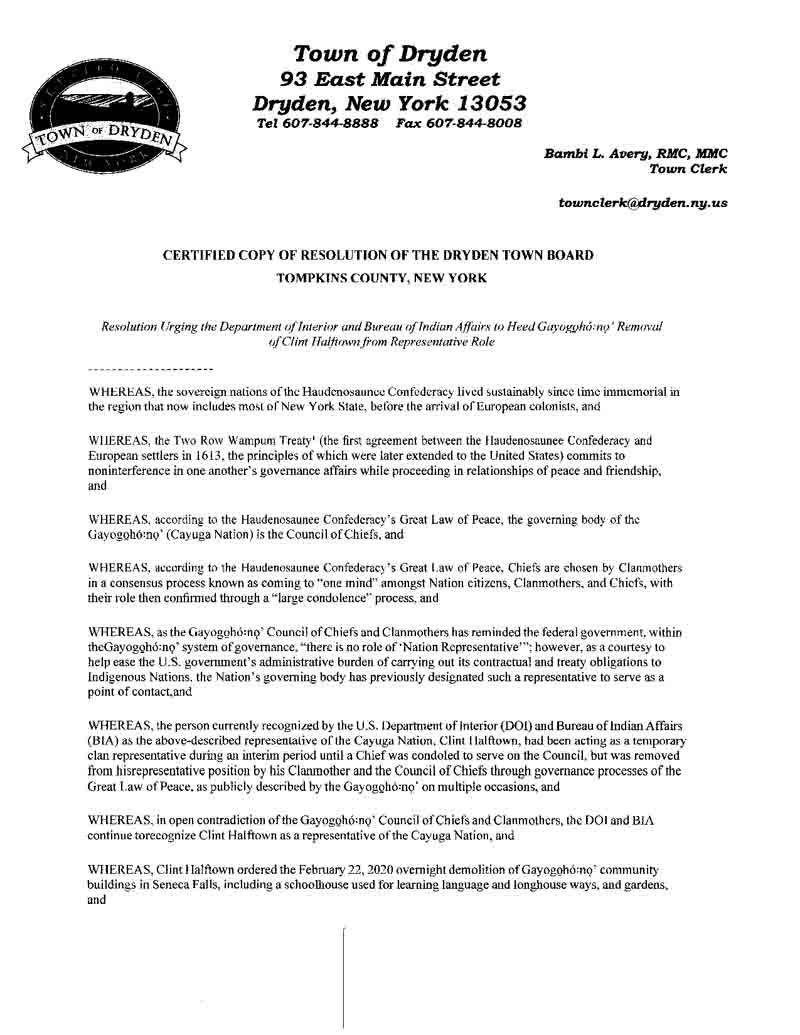 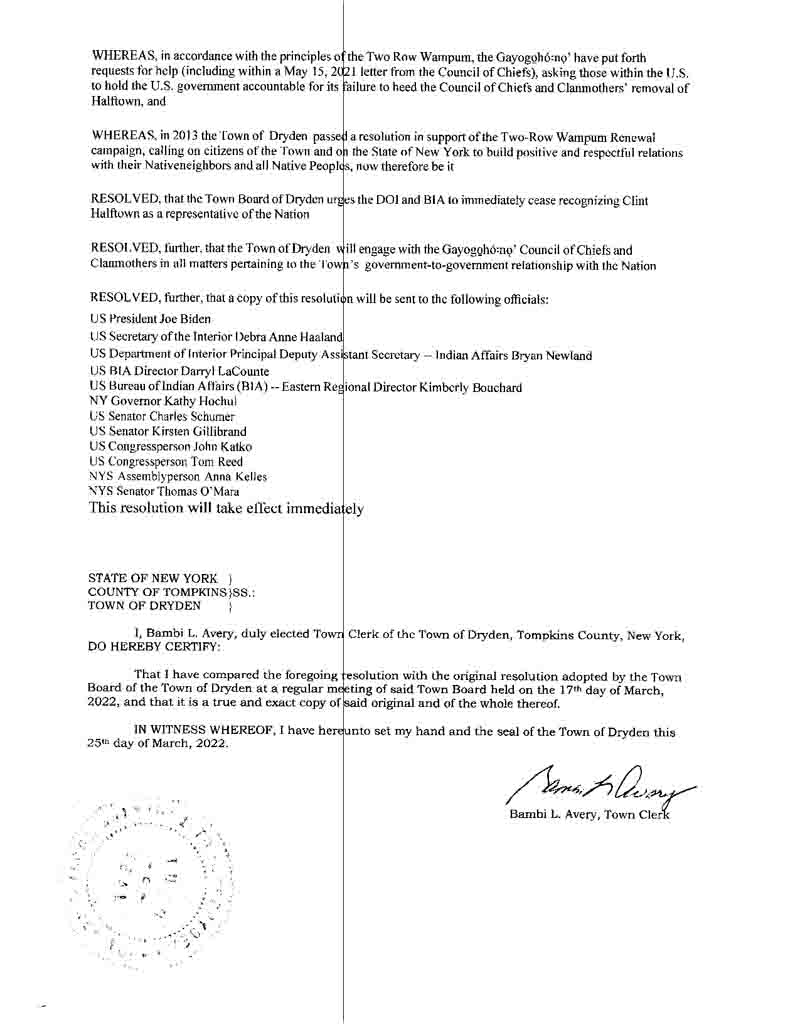 Seneca County Board of Supervisors Letter to BIA, August 26, 2021

In August 2021, Seneca County released a letter to the BIA expressing frustration with Halftown's actions and reflecting the uncertainty that many settlers have, thanks to Halftown and the BIA's recognition of him, about the legitimate leadership of the Gayogo̱hó:nǫ⁷ Nation. 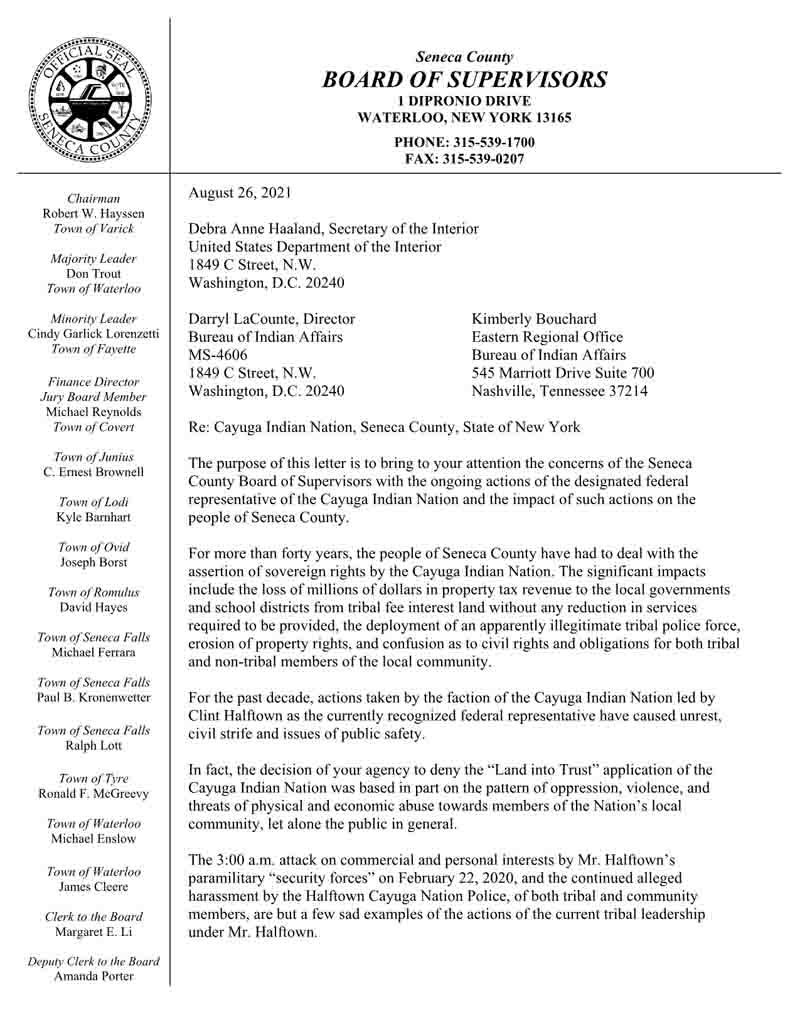 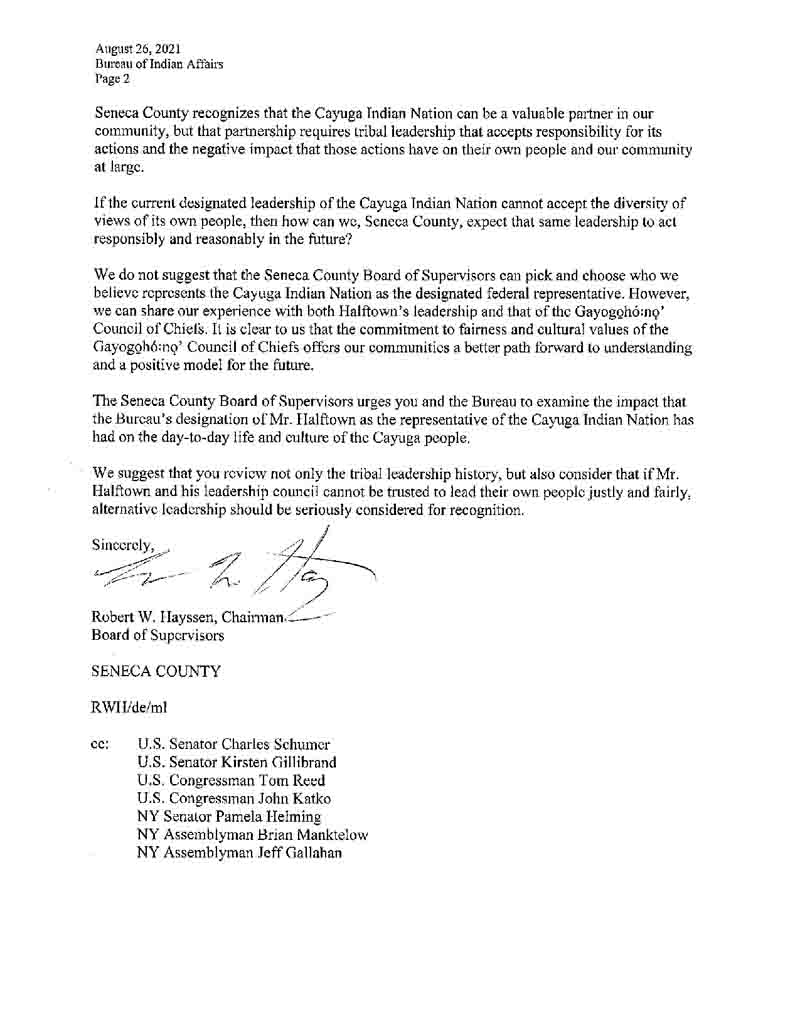 In 2013, in commemoration of the 400th anniversary of the Two Row Wampum, there was a Two Row Wampum Renewal Campaign that urged continuing relationships of peace, respect, and environmental protection. Ithaca formally supported this campaign and resolved, among other things, to build positive and respectful relationships with its Native neighbors and to call on state and federal governments to do the same. (This resolution begins halfway down the first page.) 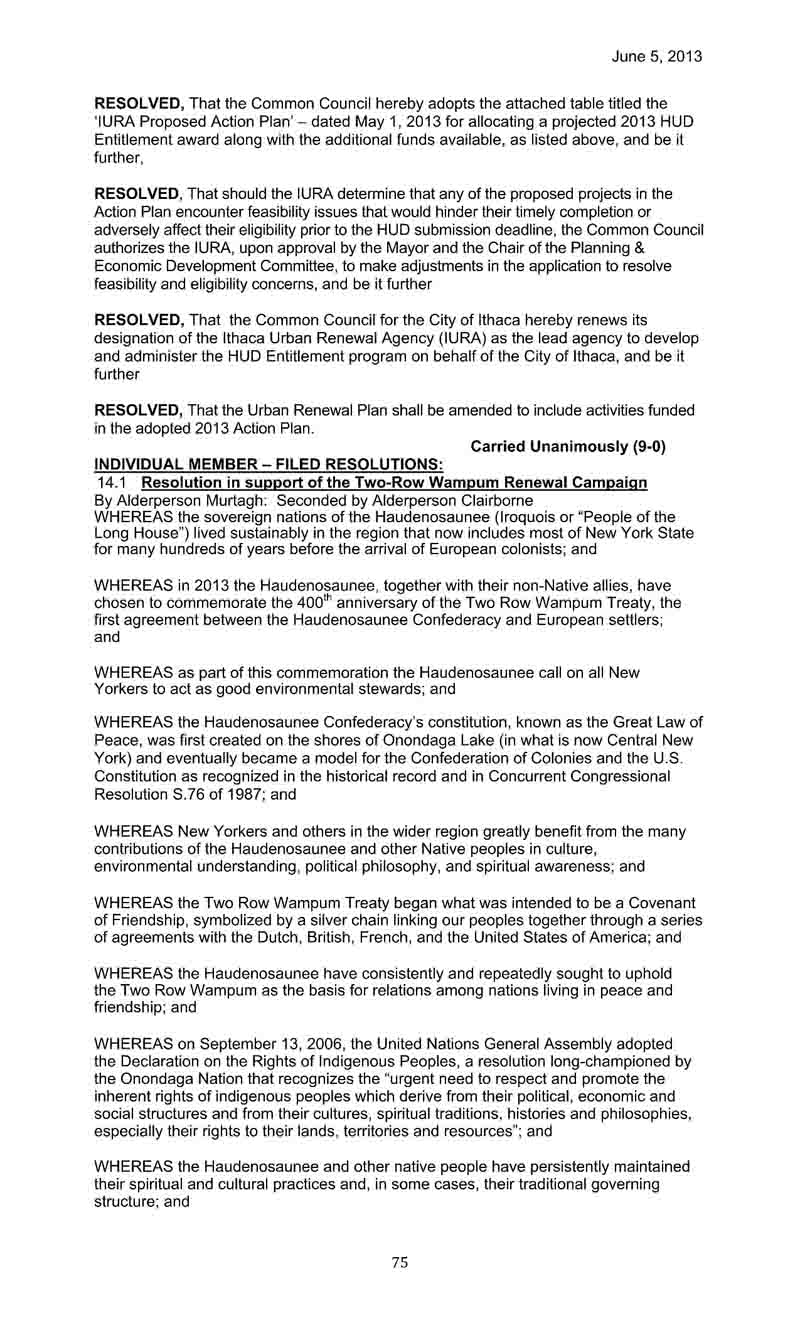 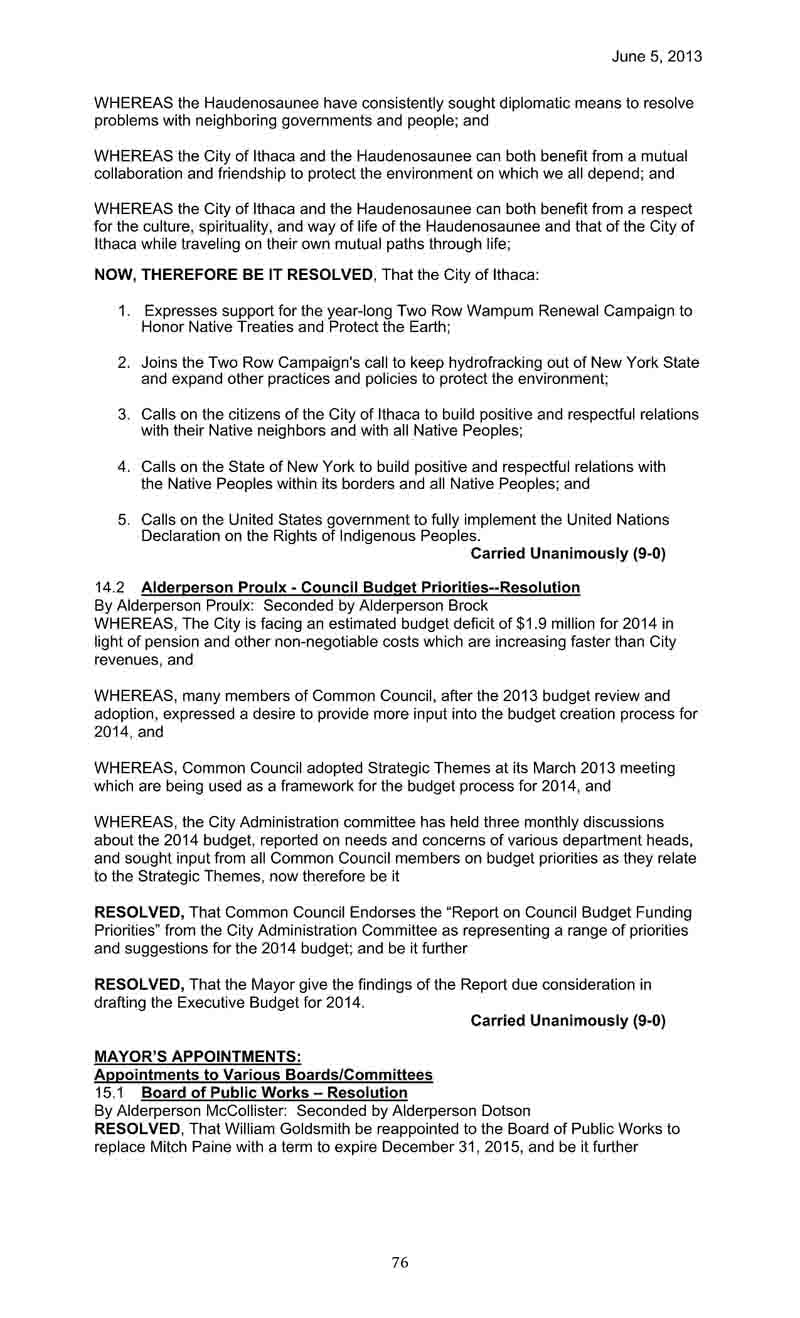 In 2011, the Eastern Region Director of the BIA, Franklin Keel, recognized and affirmed that Halftown had been removed. Only later did the Department of Interior change that decision, based on a technicality. 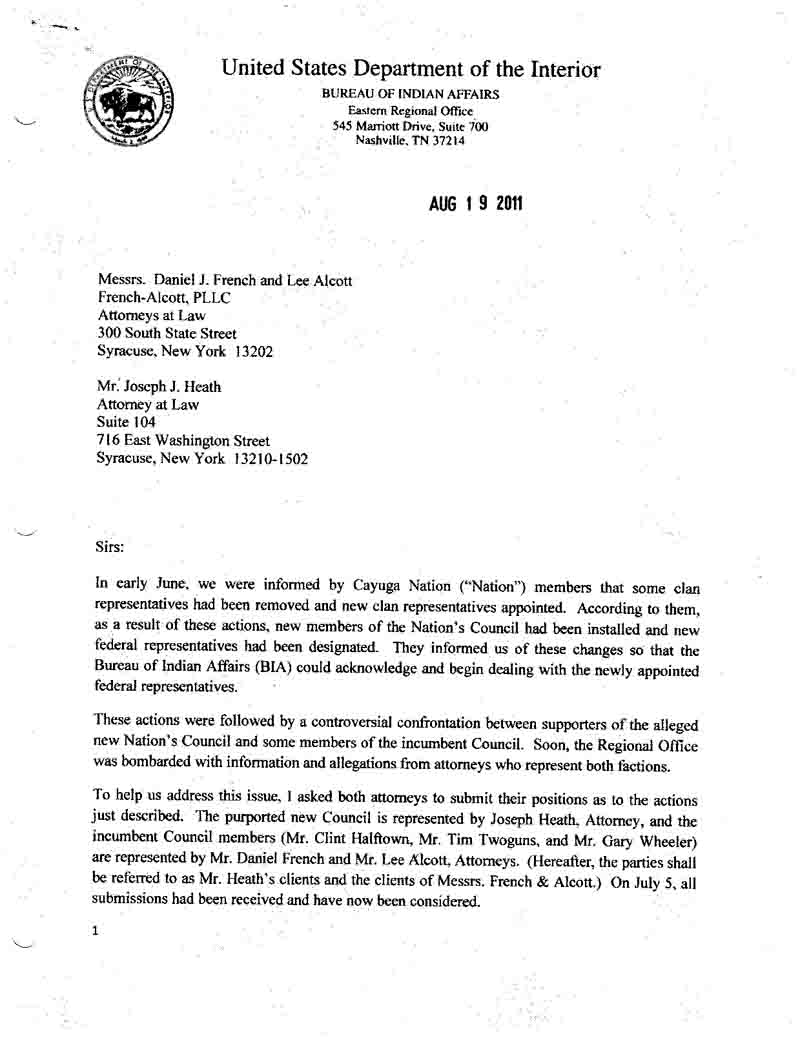 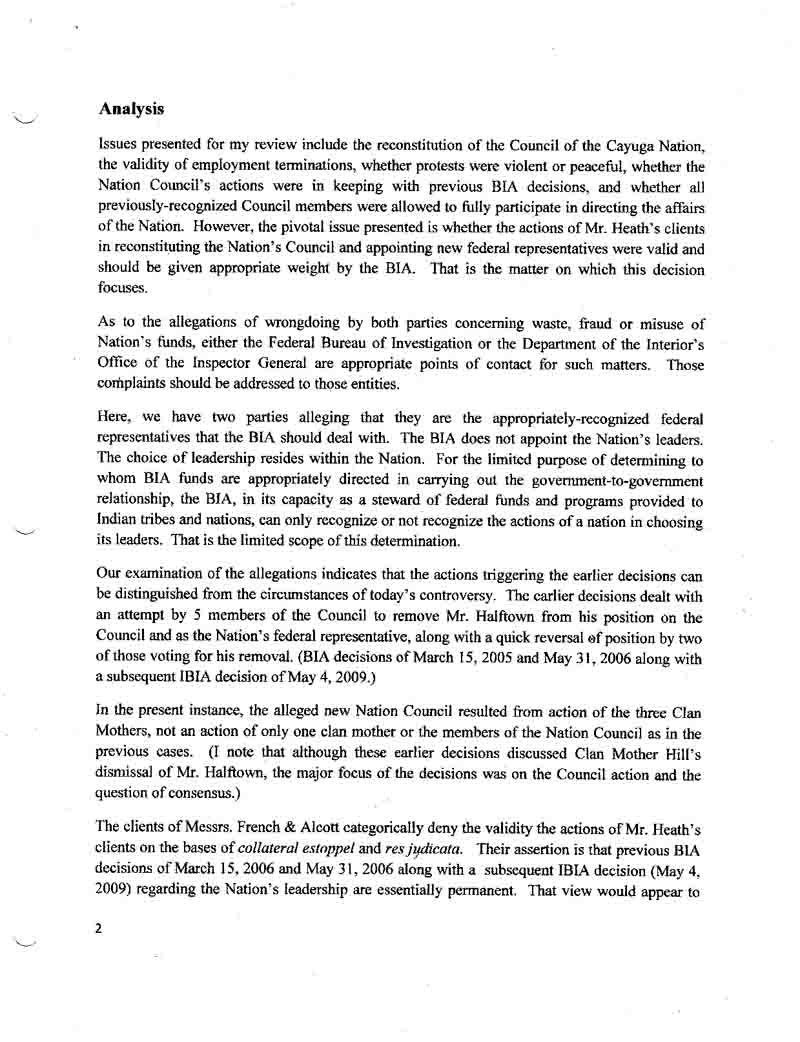 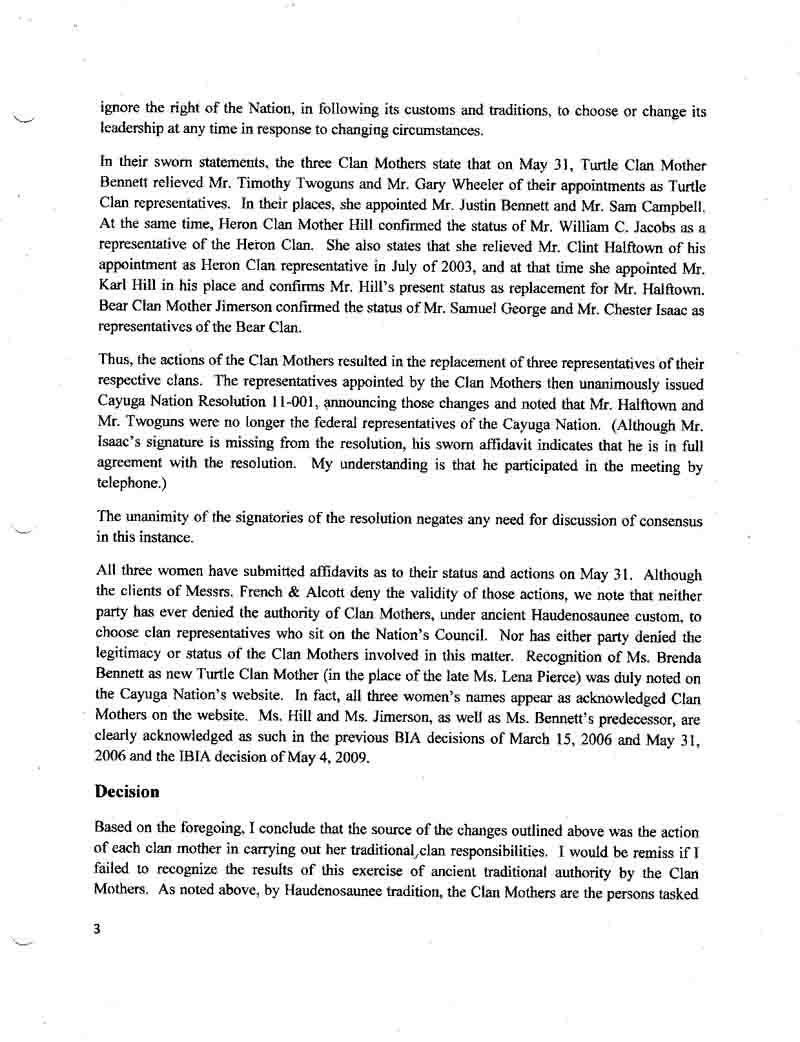 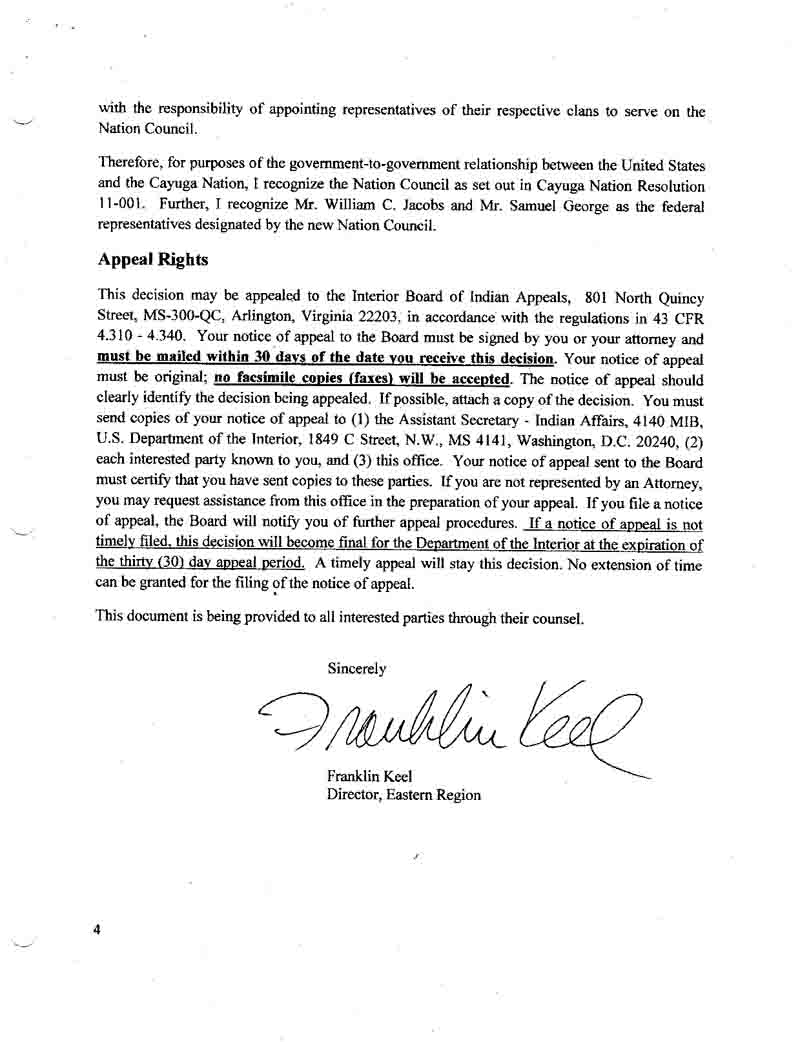